Guinea pigs are vegans and basically like most things that will grow in the ground. The variety of plans, fruits and vegetables they eat is extensive so we’ve provided as much detail as possible in this guide for you to know what guinea pigs eat. 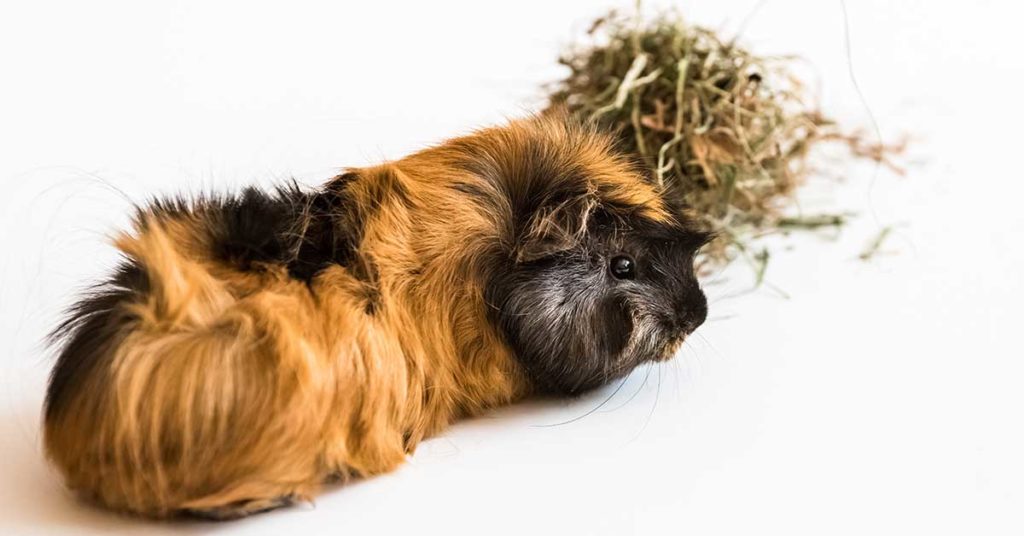 In addition to learning what do guinea pigs eat you will also learn what not to feed your guinea pig. It is important to avoid giving your guinea pig anything that is included on the blacklist as it could be harmful to your pet or make them unwell.

The menu for guinea pigs is vast and it includes branches, vegetables, plants, herbs, hay and fruits.

The staple food for your guinea pig will be hay (no lawn clippings). This is better than the junk food at the pet stores and more healthy for them. It is also less expensive.

Also it is important to note that they like to eat raw foods.

Make sure that you do not give your guinea pig too much fruits as it is like candy to them as it has lots of sugar.

Instead you should be providing mostly fresh vegetables and hay mostly.

What Do Guinea Pigs Eat?

When you are considering to feed your cavy fruit you should make sure you don’t give it to them more than once a week at most. This is because it contains a lot of fruit acids and fructose.

Fruits
Notes / Tips
Apple
May cause allergic reactions. Do not feed to your cavy if you notice mouth scabs or sores on your guinea pig’s lips.
Banana
Higher sugar content so should be given rarely to them. However good for cavies recovering from surgery as you can put mashed up medicine in them.
Grape
Is a popular treat they like so you can feed it to them a few times a week.
Kiwi
Can irritate the mouth because of the fruit acids. Feed rarely.
Mandarin
Feed rarely because of fruit acids.
Melon
Contains lots of sugar.
Orange
Can irritate the mouth because of fruit acids.
Pear
Can cause diarrhea and should not be provided to cavies with diabetes. It is rich in sugar.
Rose Hip
A great source of Vitamin C and can be provided parches or fresh.
Strawberry
Can be given to eat with the green.

Fruits you should not feed to your guinea pig.

Vegetables
Notes / Tips
Aubergine (Eggplant)
Only the fit part that is without the green.
Asparagus
Only feed rarely as its highly diuretic
Beetroot
This vegetable has oxialic acid so be careful feeding to your guinea pig. May change the color of feces and urine. Should be provided with greens.
Broccoli
Contains oxialic acid and a large amount of Vitamin C.
Carrot
Do not feed everyday because its rich in calories. Can be provided with greens. May change color of urine.
Celery
Can give the whole thing unless its a root of celery and then it needs to be peeled.
Chicory
Avoid the outer leaves as they contain large amounts of oxialic acid.
Chinese Cabbage
n/a
Corn
Only the green leaves.
Cucumber
A common and very popular food for guinea pigs.
Endive
A good source of minerals and vitamins.
Fennel
Helps digestive issues and is a good source of minerals and vitamins
Field Salad
Needs to be only given in small amounts because of the nitrates which cause diarrhea and flatulence.
Frisee
n/a
Green Oats
n/a
Iceberg Lettuce
Can cause flatulence and diarrhea so only give in small amounts because of the nitrates.
Kohlrabi
Only provide rarely.
Lettuce
Provide only rarely because of the nitrates.
Lollo Bianco
n/a
Mangel (Mangold)
Has oxialic acid so only provide rarely.
Paprika
Rich source of Vitamin C. Only give stalk and only if ripe.
Parsley Root
n/a
Parsnip
n/a
Pumpkin
Note the decorative gourds are not to be considered as food!
Radicchio
n/a
Radish
Only the greens.
Red Oak Leaf Lettuce
n/a
Rocket
Contains mustard seed oil so feed only rarely.
Rutabaga
Great food for the winter season and is rich in vitamins.
Spinach
Contains oxialic acid so should only be provided rarely.
Sunchoke
The whole plant can be given to the guinea pig.
Swede (Rutabaga)
n/a
Sweet Potato (Yam)
Do not feed often as it is rich in starch and sugar. Can be given with the peel.
Tomato
Do not feed often as it contains acid.
Turnip
n/a
Turnip Greens
Good source of Vitamin C
Zucchini
Guinea pigs don’t normally like them.

Vegetables to avoid feeding to your Guinea Pigs

So this is the answer to What Do Guinea Pigs Eat?